Posted on 18th October 2019 by replicationnetwork

[* EiR = Econometrics in Replications, a feature of TRN that highlights useful econometrics procedures for re-analysing existing research. The material for this blog is primarily drawn from the recent working paper “Difference-in-differences with variation in treatment timing” by Andrew Goodman-Bacon, available from his webpage at Vanderbilt University. FIGURE 1 is modified from a lecture slide by Pamela Jakiela and Owen Ozier.]

In a recent blog at TRN, I discussed research by Clément de Chaisemartin and Xavier D’Haultfoeuille (C&H) that pointed out how heterogeneity in treatment effects causes two-way fixed effects (2WFE) estimation to produce biased estimates of Average Treatment Effects on the Treated (ATT).

This paper by Andrew Goodman-Bacon (GB) provides a nice complement to C&H. In particular, it decomposes the 2WFE estimate into mutually exclusive components. One of these can be used to identify the change in treatment effects over time. An accompanying Stata module (“bacondecomp”) allows researchers to apply GB’s procedure.

In this blog, I summarize GB’s decomposition result and reproduce his example demonstrating how his Stata command can be applied.

The canonical DD example consists of two groups, “Treatment” and “Control”, and two time periods, “Pre” and “Post”. The treatment is simultaneously applied to all members of the treatment group. The control group never receives treatment. The treatment effect is homogenous both across the treated individuals and “within” individuals over time. If there are time trends, we assume they are identical across both groups (“common trends assumption”). 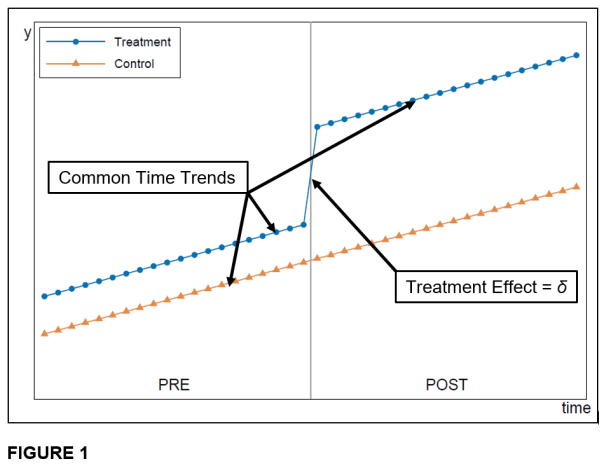 Let δ be the ATT (which is the same for everybody and constant over time). Note that ATT is given by the double difference DD, where,

The first difference sweeps out any unobserved fixed effects that characterize Treatment individuals. This leaves δ plus the time trend for the Treatment group.

The second difference (in parentheses) sweeps out unobserved effects associated with Control individuals. This leaves the time trend for the Control group.

The first difference minus the second difference then leaves δ, the ATT, assuming both groups have a common time trend. (Note how the “common trends” assumption is key to identifying δ.)

It is easily shown that, given the above assumptions, that OLS estimation of the regression specification below produces an unbiased estimate of δ.

Note that in this case, the Early Treatment group (subscripted by k) can serve as a control group for the Late Treatment group because its treatment status does not change over the “Mid”/“Post” period. This particular paired difference ends up being important.

GB goes on to derive the following decomposition result: The probability limit of the OLS estimator of βDD consists of three components:

However, if treatment effects are heterogeneous, then even if the common trends assumption holds, estimation of the 2WFE specification will not equal the ATT. There are two sources of bias.

The first bias arise because OLS weights individual treatment effects differently depending on (i) the number of people who are treated and (ii) the timing of the treatment. This will introduce a bias if the size of the treatment effect is associated with either of these. However, this bias is not necessarily a bad thing. It is the byproduct of minimizing the variance of the estimator, so there are some efficiency gains that accompany this bias.

The second bias is associated with changes in the treatment effect over time, ΔATT. It’s entirely a bad thing.

The second term is the difference in outcomes for the Early treatees between the Post and Mid periods. Because Early treatees are treated for both of these periods, this difference should sweep away everything but the time trend if the treatment effect stays constant over time.

GB’s decomposition allows one to investigate this last type of bias. Towards that end, GB (along with Thomas Goldring and Austin Nichols) has written a Stata module called bacondecomp.

Application: Replication of Stevenson and Wolfers (2006)

To demonstate bacondecomp, GB replicates a result from the paper “Bargaining in the Shadow of the Law: Divorce Laws and Family Distress” by Betsey Stevenson and Justin Wolfers (S&W), published in The Quarterly Journal of Economics in 2006.

Among other things, S&W estimate the effect of state-level, no-fault divorce laws on female suicide. Over their sample period of 1964–1996, 37 US states gradually adopted no-fault divorce. 8 states had already done so, and 5 states never did.

[NOTE: The data and code to reproduce the results below are taken directly from the examples in the help file accompanying bacondecomp. They can be obtained by installing bacondecomp and then accessing the help documentation through Stata].

GB does not exactly reproduce S&W’s result, but uses a similar specification and obtains a similar result. In particular, he estimates the following regression

where asmrs is the suicide mortality rate per one million women; post is the treatment dummy variable (i.e., Dit); pcinc, asmrh, and cases are control variables for income, the homicide mortality rate, and the welfare case load; and αi and αt are individual and time fixed effects.

The 2WFE estimate of βDD is -2.52. In other words, this specification estimates that no-default divorce reform reduced female suicides by 2.52 fatalities per million women.

The bacondecomp command decomposes the 2WFE estimate of -2.52 into three separate components by treatment (T) and control (C) groups.

bacondecomp produces the following table, where “Beta” is the DD estimate for the respective group and “TotalWeight” represents its share in the overall estimated effect (-2.52). Notice that the sum of the products of “Beta” × “TotalWeight” ≈ the 2WFE estimate.

Conspiculously, the first group (Timing_groups) finds that no-fault divorce reform is associated with an increase in the female suicide rate (+2.60). In contrast, the latter two groups find a decrease (-7.02 and -5.26). This is indicative that there may be changes in treatment effects over time. If so, this would invalidate the difference-in-differences estimation framework.

Unfortunately, bacondecomp does not produce a corrected estimate of ATT. It is primarily useful for identifying a potential problem with time-varying treatment effects. As a result, it should be seen as complementing other approaches, such as the estimation procedures of de Chaisemartin and D’Haultfoeuille (see here), or an alternative approach such as an event study framework that includes dummies for each post-treatment period (see here).

Goodman-Bacon, A. (2018). Difference-in-differences with variation in treatment timing. National Bureau of Economic Research, No. w25018.